Based in Cape Town since 2000. We buy, sell, and trade most kinds of vinyl – vintage and new. Also CD’s, tapes, comics, and music related DVD’s and books.

Mabu Vinyl will be closed on the 30th September and the 1st of October 2018 for a big Spring Cleaning.

The Mabu Vinyl Mid-Year Half Price Sale – On now, till the end of July.

Half price on all LPs, seven singles, books, cassettes, DVD’s, CD’s and magazines.

I’m at my favourite record store in Cape Town bemoaning the lack of decent second-hand vinyl these days, when the conversation shifts to collectable South African records – is there such a thing you may ask, as a collector’s market for SA vinyl?

Among aficionados both local and international one thing is certain – LP’s from around the world have become more and more collectable when it comes to certain artists, but more importantly, SA vinyl from the early 1950’s onwards has not escaped the attention of serious collectors worldwide.

“So, what’s the value of a decent copy of Time to Suck by that notorious band SUCK, on the Parlophone label?” I ask.

“Well,” says the owner, “we’ve recently sold a copy to a Russian collector for 20 G’s.”

In 1970 when the record was released, you could buy a new copy for R1.99 at the local record shop, so do the math – it’s about a million and some percent profit over 50 years.

Even cryptocurrencies can’t beat that performance it seems, so what’s going on?

They began recording for Calder at EMI and each released albums over a period of some 5 years, in the process creating some of the most vital and original music ever to be released on these shores.

In most cases only very limited numbers were stamped at EMI’s plant and sold to the public, and unlike European and American markets, were never released again. This is why their values have skyrocketed over the years. In most instances the groups themselves never became wealthy individuals, Calder later built a multi-million-pound music empire in the UK.

Unlike cryptocurrencies which have become huge investment traps, vinyl has some unique qualities which are much more attractive: you get something tangible. a large piece of plastic with a concentric layer of grooves, a central label identifying artist and record company, and most importantly – a hole in the centre!

Removed from a sleeve, most of which are visually gratifying to the eye, the shiny disc is placed on a turntable and the phono cartridge does the job of conveying the music to your ears. Unlike your cryptocurrency, the LP record doesn’t spin out of control over bad news in the marketplace, it keeps appreciating in value over the years with successive hearings.

The thing that really intrigues me with the Suck album is this – essentially, it’s a collection of heavy rock cover versions, only one original song on the entire record. Played with some ferocity, you can’t help thinking these are some pretty mean dudes involved. The cover doesn’t help, a young boy sitting in front of somebody’s bass drum.

That drum belonged to Savvy Grande, who whacked the skins for Suck, along with cohorts Andy Ionnides, Louis “Moose “Forer and Steve Gilroy.

Open the cover and there you see the gringos in all their glory, in the heyday which saw them become the most notorious group in the country: they beat a path of musical mayhem and destruction around the country, eventually disbanding because no theatres would allow them to play.

“I certainly didn’t get any money from Suck” says a chagrined Savvy, “instead I invested in the restoration of motorcycles, some of which are sold to collectors around the world, some ending up in museums in countries such as Portugal”. Cryptocurrencies don’t interest me at all, I prefer to earn a living using my hands and my technical skills.

Steve Gilroy, a savvy Englishman who came to SA in the 60’s has a different story:

After Suck disbanded, he started a publishing company in Johannesburg, and then began experimenting with home-made beer-making. After several years he expanded his skills into brewing fulltime. He established Gilroy’s in Muldersdrift, which has become popular for his craft beers and his Up Yours poems.

Talking it up has been the making of cryptocurrencies worldwide, but the vinyl revival has ensured that collectors around the globe have achieved more than satisfactory returns from their own collection investments – probably on a far greater measure both aurally and visually.

For those who have SA collectibles the news is good – those shiny plastic discs contain gold – kids, check out dad’s or grandpa’s record collection, there’s bound to be something valuable in there – so much more exciting than sitting on the pc chasing after shadows in the crypto world!

“Cold Fact is the album from singer-songwriter Sixto Rodriguez, who became a cultural phenomenon in South Africa and was made internationally famous in the film ‘Searching for Sugar Man.’ It is also a play on the cold soak technique we use to extract flavour from the skins of our ripest Sauvignon Blanc grapes (we search for sugar man), which are then chilled and left for hours or even overnight on the skins, with the process helping to extract the intense flavours associated with this highly aromatic grape variety.” 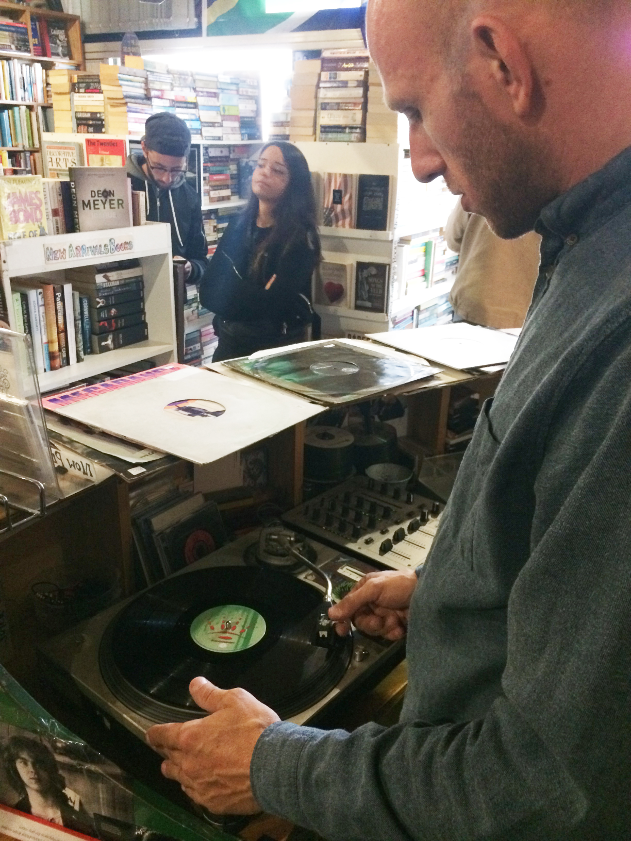 Starting at Mabu Vinyl in Gardens in the city centre we weren’t expecting to find anything of particular interest.

Yet after ten minutes of digging through crates and crates of seemingly unimportant stuff, we landed up with a pile of about 50 records! JED and I were in complete awe of just how much good stuff was just sitting there overlooked day after day. In turn, this made us realize just how much we still have to learn about the music we love. We’re often so caught up in looking for digital music that our exposure to physical material is simply lacking.

It’s fair to say that one of the reasons that clubbing in South Africa has lost some of its charm is simply by virtue of DJs becoming too lazy to dig deeper for more obscure (yet often more exciting) material.

We kept digging until we got the chance to visit Mabu’s exclusive vinyl basement. And as expected, Zak found more exciting material for him and us—so needless to say, we all left happy and with our hands full.

Immortalized in the Searching for Sugar Man documentary film, this is a great introduction to African rhythms and the genres are as broad and all-encompassing as the continent itself. Hip hop, house, jazz, soul, funk, R&B – check. But add rock, pop, techno and dancehall too – and you’re still not even close to unearthing the full extent of this Gardens favorite, a nice addition to this upscale suburb of the city.

Speaking About Sugar Man: All The Cold Facts

An informative and inspiring motivational talk about the Rodriguez phenomenon.

For the past 20 years, Stephen “Sugar” Segerman has been involved in the rediscovery of, and resurgence of worldwide interest in, Sixto Rodriguez. This legendary and internationally acclaimed American folk-rock singer-songwriter, who was a huge success in South Africa from the ‘70’s onwards, was believed to be dead but was found alive and well and living in Detroit in 1997. Since then his career has gone from strength to strength following a series of international tours, the re-release of his albums, and the success of the Oscar-winning film about this extraordinary story, ‘Searching For Sugar Man’, in 2013.

Now you can enjoy hearing Stephen “Sugar” Segerman talk about this whole musical adventure. “Sugar” as he is popularly known, has travelled around South Africa and overseas giving these talks and answering questions for the past few years, following the success of the film. He attended the Academy Awards ceremony in 2013, followed by the publishing of his best selling book in 2015, called “Sugar Man – The Birth, Death and Resurrection of Sixto Rodriguez”, co-written with his fellow “Musical Detective” in the story, Craig Bartholomew Strydom.

Stephen “Sugar” Segerman lives in Cape Town and is the owner of the iconic record store, Mabu Vinyl, in Gardens. Along with Malik Bendjelloul, the director of the film ‘Searching For Sugar Man’, Sugar spent over six years working on the documentary which premiered at the 2012 Sundance Festival, where it won two awards. The film then spent the rest of 2012 being shown at many Film Festivals around the world where it won a host of awards, including the Bafta Award, and then in 2013, the Oscar award for Best Documentary.

To find out the details involved in booking Stephen for a talk at your venue, which lasts approximately an hour and a half and includes a question and answer session, please contact:

or use the form below: